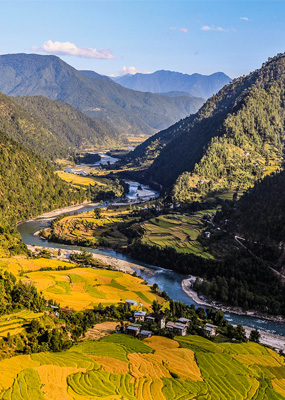 Trongsa Dzong is the largest dzong fortress in Bhutan, located in Trongsa (formerly Tongsa) in Trongsa district, in the centre of the country. Built on a spur overlooking the gorge of the Mangde River, a temple was first established at the location in 1543 by the Drukpa lama, Ngagi Wangchuk son of Ngawang Chhojey. In 1647, his great-grandson Shabdrung Ngawang Namgyal constructed the first dzong to replace it, called Chökhor Rabtentse Dzong with a shorter version of Choetse Dzong. It was enlarged several times during the 18th century; the Chenrezig Lhakang was built in 1715 and a whole complex, including the Maitreya (Jampa) temple, was added in 1771. The dzong has since been repaired on several occasions; it was damaged during the 1897 Assam earthquake and underwent extensive renovation in 1927 and 1999.

Join with us on Social Media